Another story in the Wall Street Journal caught my eye this morning – a public spat between SAP and Oracle, two of the enterprise software industry giants, over a new ad campaign Oracle is running.

It seems that SAP is mightily upset over the focus of Oracle’s campaign, which SAP says is a rip-off of the long-running advertising SAP has been doing in 42 countries around the world with the theme of “The best-run businesses run SAP” and using a different, usually well-known, company in different ads. Oracle’s new ad has the tag line “The best companies run Oracle applications.”

Oracle believes there’s no merit in SAP’s accusations. Whether there is or not, Oracle’s tactics are typical of a company that’s very aggressive in its approach to its market and winning market share. It’s also one reason why it’s a very successful business. 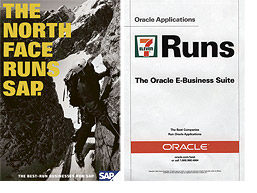 So, here’s the no-brainer quiz question. Do these two ads – SAP on the left and Oracle on the right – convey a similar message? Don’t take too long on this…