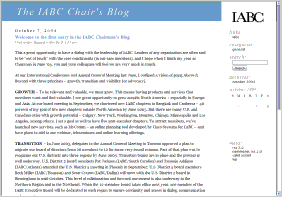 Following my post on Friday re PRSA and IABC, I discovered late on Saturday that a blog by 2004-2005 IABC Chairman, David Kistle, ABC, is imminent as this screenshot indicates.

That answers the prime call:

To start with, I’d like to see the leaders of the PRSA and IABC with a blog. I want to know what those leaders have to say on these issues; how they will encourage open dialog, debate and conversations; and lead the way for our profession. That would be an exemplar demonstration of leadership.

This is a great leadership step forward for IABC. In a press release in July announcing Kistle’s accession, IABC said one of the three goals he has outlined for IABC is visibility, stating: "Through the media, participation in expert panels and business forums, and speaking platforms, IABC has a huge opportunity to build awareness and understanding of the important contribution that IABC and its members make to the profession."

The blog will be a powerful speaking platform. Kistle is a very good representative for the communication profession. A senior vice president with the Padilla, Spears & Beardsley PR firm in Minneapolis, USA, he is a long-time IABC member and leader. I very much look forward to him taking a lead with his blog in developing open dialog, debate and conversations on the major issues that confront our profession – blogging being just one.

The blog hasn’t been publicly announced yet. But, it’s address is easily and openly reachable. Indeed, it’s very easy to guess what it might be. As with any website, if it’s on the internet, it can be accessed by anyone and is fair game.

So I offer some advice to the planners in any organization developing a blog, no matter what type: if you want to keep it under wraps until you publicly launch, make sure you either protect access to it (password at least) or hide the URL behind your firewall so it’s invisible outside.

A similar example was highlighted on Friday by Steve Rubel at Micro Persuasion re a Coca-Cola internal marketing blog.