Today the much-heralded Firefox full-page ad in the New York Times appeared. Except it’s not a full-page ad – it’s a two-page spread: 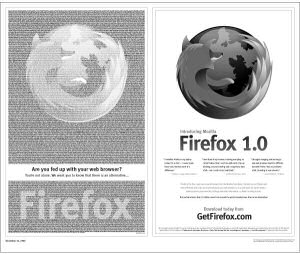 As explained in a post today on Spread Firefox:

[…] Thousands of us rallied together in 10 short days to pull off the largest open source fundraising campaign in history. And today, we can see the result of our efforts. We’re on two full pages in The New York Times because our message is big – much bigger than the ad itself. This is just the precursor to what will become a broadening campaign of Firefox advocacy throughout the world.

So take a good look (you’re going to have to!); these folks were willing to put their name out there and be the first to publicly support Firefox and our community at a scale never before attempted in open source history. We owe them a debt of gratitude for taking this risk on the behalf of the 50,000 member-strong Spread Firefox community.

What we have accomplished so far is nothing short of incredible – and I know full well that this is only the beginning!

You can download a PDF of the ad. Looks like all 10,000 names are indeed mentioned. Small type, as you might expect! I found my name in there (at 800% magnification).

Another milestone for a very successful marketing campaign.

Download tally today, by the way – over 11 million and counting.