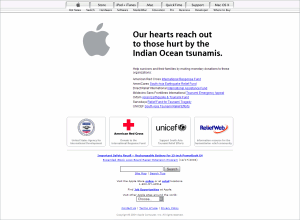 Apple is the most prominent company I’ve seen so far in its open and very public support for the earthquake/tsunamis disaster in Asia last Sunday.

As the screenshot above shows, the company has given over its corporate website home page to stating its commitment and support for victims plus links to sites you can go to and make a donation.

This is a fantastic gesture. But Apple is not alone:

No doubt there are many more companies* doing similar things. This is all great news.

According to a Reuters report a few hours ago, the death toll from last Sunday’s earthquake/tsunamis disaster has now passed 120,000. Millions are homeless. And it’s looking increasingly likely that the majority of missing European tourists in Thailand I blogged about earlier today are dead, as they probably are elsewhere in the region.

*Additional info: Excellent report on CNN Money this evening with details on around 40 US companies and their great contributions to relief efforts.